Beard Growth vitamins are a great way to get the beard length and fullness you would love to have. That’s right guys, our beards need essential vitamins and minerals in order to properly grow and thrive.

Without these crucial nutrients, there’s a chance you’ll end up with a beard that’s peppered with patchy spots and sparse areas. So let's take a look at what are the Best Beard Vitamins available on the market to buy today.

Now, that’s not the kind of beard Odin as well as other bearded gods of Asgard would be happy to see!

Luckily, you can tell Odin and the gang that in some cases, genetics are to be blamed, though nutrient deficiency could also be the culprit.

Sure, you can get those all-important beard vitamins and minerals from your daily meals, but chances are, you’re not getting enough of them, or you wouldn’t be here reading this right now, right?

Listen, now that you’re here, feel free to check out the following list of the best beard growth vitamins currently available on the market.

Beard growth vitamins are specifically formulated to supply essential nutrients needed to boost your facial hair growth in the way you expect. So, they may just be the answer to your prayers of owning a thick, masculine, and majestic fuller beard that will turn heads and have all the ladies’ eyes on you. Let's take a look at the most popular choice below.

Check out the best seller 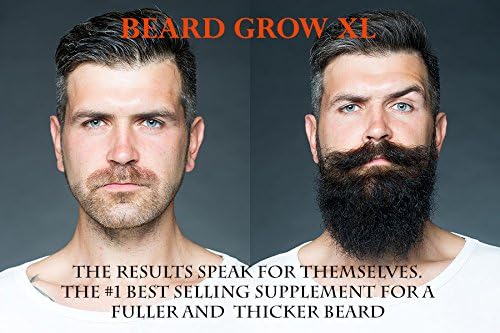 These vitamins are made by Delta Genesis who came up with their own personal beard supplement formula of to supply your body with the fuel it needs to grow thicker and softer beards. If you struggle with thin or patchy beard, or your beard is just not as thick as you like, then I would recommend giving this a shot.

Incorporating close to a dozen wholesome ingredients that are reputed to promote healthy hair growth, Iron Beard is an inexpensive beard and hair growth vitamin formula that has been getting a lot of great press from users. 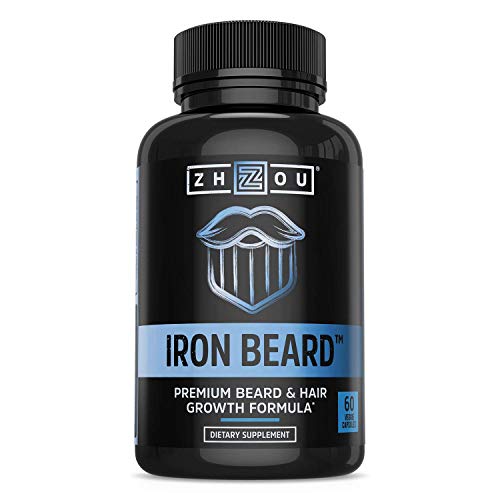 It may not be the greatest tasting vitamin formula, but it certainly works for a good deal of people including yours truly.

First, the ingredients in Iron Beard are solid and the inclusion of herbal complex consisting of Fo-Ti powder, nettle, pumpkin seed, and saw palmetto inspires confidence.

According to studies, these herbs are the crème de la crème when it comes to facilitating hair growth and boosting the health of your skin.

Anyway, other than its terrible taste, Iron Beard works well for filling patchy beard spots, adding thickness to your beard, and making it grow evenly.

Since it is taken orally, its ability to stimulate hair growth may not be limited to only your facial area, but hair on other parts of your body too.

Like other beard growing supplements, the Iron Beard won’t help you grow hair in places where hair follicles are absent.

Again, mileage will vary among users.

Quite a lot of users claim that they noticed results within a couple of weeks, while I and others experienced positive growth after finishing our first bottle of 60 capsules (30-day supply).

Of course, there's a bunch of users who have expressed their discontent with the product’s complete lack of efficacy—even after trying out multiple bottles.

The good news is the Iron Beard isn’t as pricey as the Beard Grow XL, so my suggestion is to test-drive one bottle and see if it produces the results you desire.

In addition to being a superb hormone-free beard growth formula, this product responsible for launching my interest in experimenting with various beard growth vitamins when I was skeptical of them. 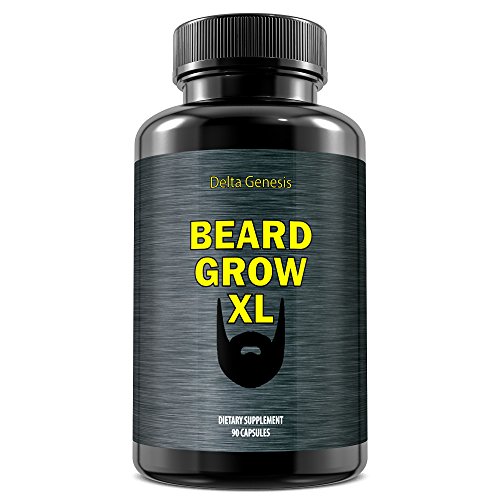 I had dropped by my buddy’s place, and when I saw him with close to a full beard, which is a tremendous accomplishment given the fact that he’s a 5th generation Chinese American, and I was told that men of Chinese descent often struggle to grow a full and thicker beard.

And there he was standing in the doorway with his manly facial mane. Prior to this, he could grow only peach fuzz beard with thin hair and absent patches all over.

I asked him what his secret was and he replied, “I’ve been taking this thing called Beard-Grow XL.” 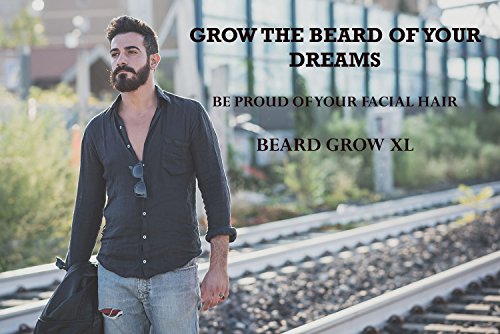 After scrutinizing his used of a bottle, I thought, “Okay, sure, I’ll give it a go.”

Although I’ve heard of beard growth vitamins before and was still a skeptic at this point, a recommendation from a trusted friend obviously broke down my skepticism barrier, so a few days later I ordered a bottle.

The graphics on the bottle may look shamefully lame, but the results I experienced after 3 weeks of taking this formula were far from lame.

I’ve always had these unpleasant patchy thin spots, but thanks to this supplement, those spots were filled with thick and soft hair.

In addition, my beard was growing at a significantly quicker rate.

For example, the hair below my lower lip would typically take about 9 to 10 days to grow, but while I was on it, it only took just 4 to 5 days.

Overall, it did a wonderful job of thickening my beard and giving it that coveted full look.

Be warned; this thing is expensive! I stopped taking it after my second bottle (also because I wanted to experiment with other beard vitamins out there).

Do keep in mind that this isn’t some magical solution that enables you to sprout facial hair in areas where there are absolutely no hair follicles present in the first place.

And like most supplements, results will vary from one guy to the next, so there’s a chance it might not work for you at all.

But if you’ve been itching to grow a full-blown bushy beard, then from my experience, the it is definitely worth a try.

Always remember the saying of those valiant, mega handsome, full-bearded Vikings of old: “You won't know until you try”.

Well, they didn’t say that, but I’m pretty certain that’s what their response would be if you were to ask them whether you should try it out.

In addition to being a superb hormone-free beard growth formula, Beard Growth Tonic is the product responsible for launching my interest in experimenting with various beard growth vitamins when I was skeptical of them. 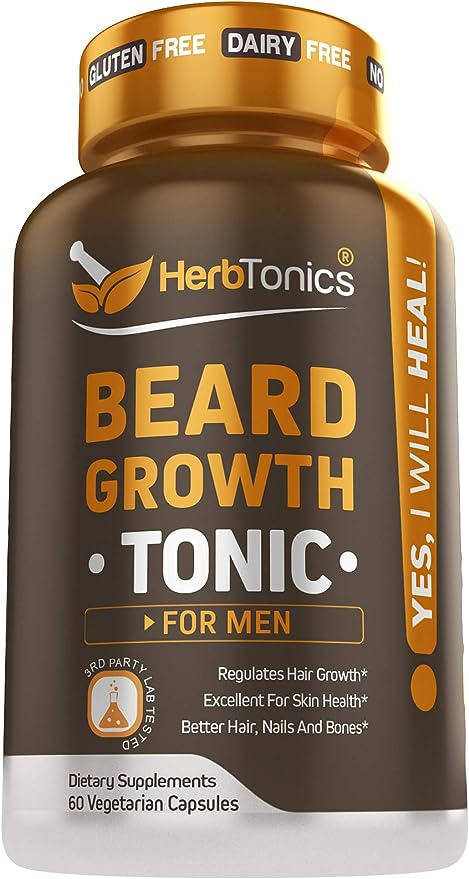 Chock full of vitamins and minerals including a respectable dose of biotin and keratin, the makers of Beard Growthtonic assert that their formula is able to help you “get thicker, darker, faster, newer beard in just 2 weeks!”

And that’s not all…

They are even offering a “100% money back refund if you don't see a faster and thicker growing beard in just 60 days.”

Note: The above-quoted lines can be found on the product page at the time of writing.

Just letting you know in case at some point in the future, they decide to revise their bold claim or do away with the money-back guarantee.

Moving on, by extending such an irresistible guarantee, it’s clear the people at Herbtonics have done their homework, and are therefore mighty confident of the Beard Growthtonic’s ability to deliver the goods.

While the formula is packed with many healthful vitamins and minerals, I’m guessing their bold confidence is largely based on the two ingredients I mentioned earlier: biotin and keratin.

Some studies have shown that both biotin (a vitamin from the B family) and keratin (a type of protein) provide very positive advantages for hair growth.

And it so happens that each serving contains a whopping 5000mcg of biotin and 25mg of hydrolyzed keratin.

Still, like other beard growing vitamins listed on this page, I can't say definitively whether the Beard Growthtonic will work for you or not.

Again, “try” is the keyword here and if it doesn’t do squat; you can always take the makers up on their money-back guarantee deal.

This organic beard growth formula offer a solid combination of vitamins and minerals, along with 650mcg of proprietary blend comprising of methylsulfonylmethane (MSM) and pumpkin seed. 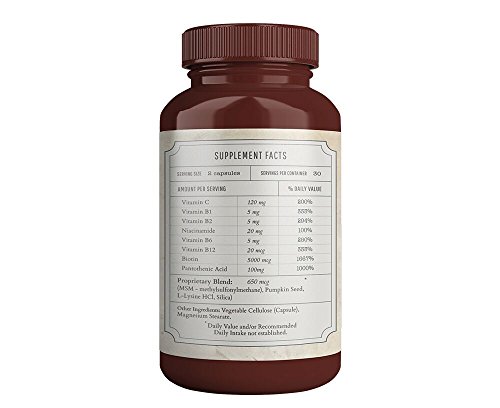 A naturally occurring sulfur-based compound that’s available in daily foods such seafood, green veggies and even coffee, MSM became a force among beard growing ingredients after some researchers discovered its wondrous capacity to churn out collagen, which is a protein that’s aids in shaping up our nails, skin, and of course, hair.

While there are folks in the science community who are still unconvinced as to the effectiveness of MSM in fuelling hair growth, some people who take hair- or beard-growing supplements containing MSM have reported to experience growth improvements in only a matter of weeks.

Personally, I think it’s the combination of several other ingredients that led to such dramatic improvements. Collagen, after all, cannot take shape without the presence of vitamin C.

There’s a money-back guarantee on this one too (available at the time of writing).

Beard king surprised me once with their outstanding beard shaving bid, and now they’ve surprised me again with another quality beard-related product meant to help you grow a healthy looking beard that will be the envy of many men. 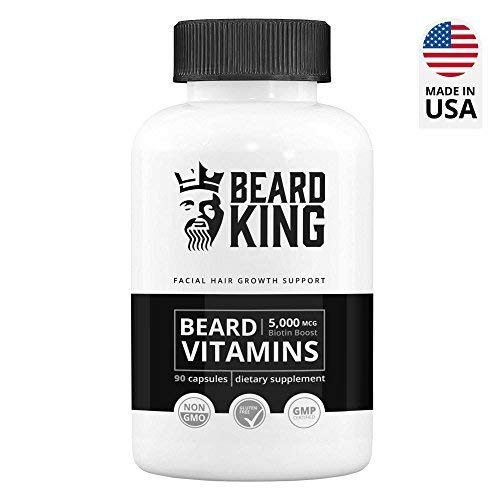 The good folks at Beard King have added plenty of ingredients to appeal to every facial hair follicle, so that your slow growing patchy beard may sprout quickly and evenly without resorting to expensive beard transplant procedure.

Horsetail extract is included as part of its proprietary complex and this plant is rich with selenium, a mineral long established as a key component in encouraging robust hair growth.

If your body lacks selenium, then growing a nice bushy beard will be a huge feat.

So, do Beard King’s vitamins work?

It’s not bad, but I would say the growth rate isn’t as quick as the Beard Grow XL.

Also, going by the reviews available currently, it does appear to work for the majority of users.

A handful of users, however, have claimed otherwise.

From vitamins A, C, E, B1, B5, B6, B12, biotin, niacin, riboflavin, to the aforementioned horsetail extract, MSM, saw palmetto and others, this supplement clearly has some serious beard growth firepower.

And as a bonus, it’s made in the USA by a company that’s renowned for their customer support.

For its ability to produce dramatically fast and effective results, my number one pick for the best beard vitamins goes to Beard Grow XL.

It was a really good buy for me, although I still feel it’s overpriced.

In fact, I’m sure some of you who are reading this will be put off by its price and may go for the cheaper options.

That’s understandable, but aside from its off-putting cost, the formula is as solid as a rock in my experience.
Here are other great articles to read about taking care of your beard below: